The tremendous skills and tricks of football lies in the foot of few footballers and former Arsenal player, Thierry Henry is one of the best fans and former fellow players will never forget. Recently concerning the football club, he said he would not “back down from a challenge” if a vacancy arose to succeed Arsene Wenger as manager of the Gunners.

However, Thierry Henry is desperate for his under-fire fellow Frenchman to have the “last word” on an Arsenal career that started back when Wenger took charge of the north London club in 1996.

Long-running speculation about Arsene Wenger’s position at Arsenal intensified after the Gunners suffered a fourth successive defeat in all competitions, a 2-1 Premier League loss away to Brighton, on Sunday — a result that left them a huge 13 points adrift of the top four. 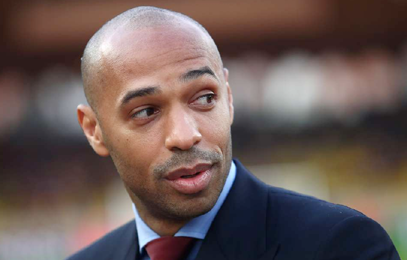 Former France forward Henry, currently working as an assistant to Belgium manager Roberto Martinez, was asked on Sky Sports if he would take the Arsenal job should the opportunity arise.

“If I had listened to people who were talking about where I was going to be, I would not have been here.

“When I arrived at Arsenal, they said to me, ‘Why are you outside of the box, you will never score goals?’ with my position being on the left or whatever it was. You don’t back down from a challenge, you always think that you can.

“When I came back to play for Arsenal, everybody, all my friends were saying, ‘It can only tarnish your legacy, why are you going back there?’.”

He also added that: “If you love a place and they ask — I repeat, they ask — for help, you are always going to say yes. What I am saying to you is again, we are talking about hypothetical thoughts.”

Having won two Premier League titles and three FA Cups under Arsene Wenger, Thierry Henry, Arsenal’s all-time record goalscorer, said he was desperate for the veteran manager to decide his own future.

“We are talking about shall he quit or not — I can never say that,”

Do you understand what I mean? I can never say that. “What I don’t want to see is what’s happening to him, and I would like him to have the last word, whatever word it’s going to be.”