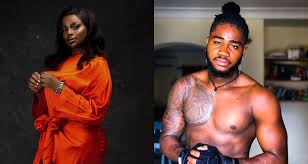 After a succulent night with Brighto, Wathoni has burst the bubbles of viewers on Friday after she boldly confessed she has feelings for Praise. Her confession marveled at other housemates who earlier thought that she really liked Brighto among the male housemate. When asked of the male housemate who she has feelings for, Wathoni said Praise. According to her, she liked Praise from the first day they got into the house.

Wathoni mentioned this during the ‘truth or dare’ game on Friday night.“The first day I saw you, I thought you were cute with your earrings and love the way you dance.“I like you”. “Loved your humor and I may just have feelings for you but you’re in a mix outside the house.”

Recall that Praise had also told Kiddwaya that he really likes Wathoni. It is not certain if he’s trying to play a game since he has a fiancee and son outside the BBNaija Reality TV show.

Furthermore, Wathoni admitted that she wanted to make Brighto jealous for not taking her seriously during the past few days. She insisted that Brighto must be present before she told Praise anything. She also did the most by allowing Praise to suck on her breast in front of Brighto.

From the look of things, guess both individuals Wathoni and Praise happens to like each other from the onset.